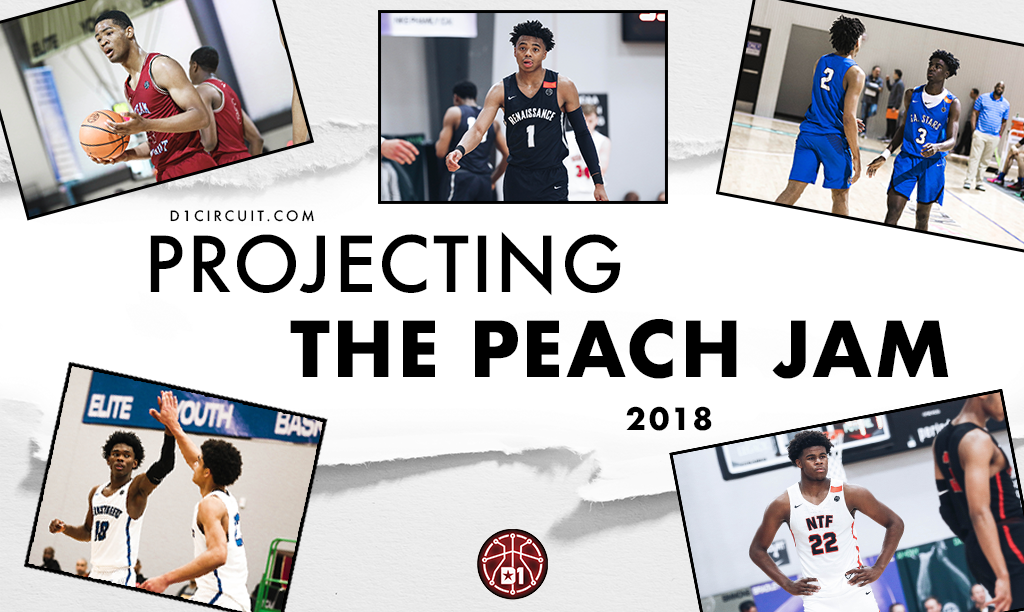 The 2018 Peach Jam field will be decided in Hampton this weekend.

Through three sessions, only six teams have clinched, and only five have been eliminated.

29 programs will compete for the remaining 18 bids.

The top five teams in each Division will receive an automatic bid to Peach Jam.

The remaining four bids will be at-large selections, chosen by Nike.

Below is a detailed breakdown of where each team stands heading into EYBL Hampton.

City Rocks (9-3)
The Rocks clinched a Peach Jam berth with a 4-0 showing in Atlanta. They have a very difficult schedule to close out the season. Isaiah Stewart vs. James Wiseman will be extremely entertaining in the opener.
Remaining schedule: Bluff City Legends, CIA Bounce, Brad Beal Elite, MOKAN Elite

Woodz Elite (8-4)
Woodz is likely one win away from clinching, and they have one of the lightest remaining schedule among contenders.
Remaining schedule: CIA Bounce, UPLAY Canada, Seattle Rotary, Rose City Rebels

Brad Beal Elite (8-4)
BBE looks to be in good shape to lock up a bid, as two of their Hampton matchups are against teams who have already been eliminated.
Remaining schedule: UPLAY, Rose City, City Rocks, MEBO

Seattle Rotary (8-4)
Seattle Rotary is one win away from clinching their first ever trip to Peach Jam. Dropping the opener against MEBO would be potentially disastrous.
Remaining schedule: MEBO, Bluff City, Woodz Elite, UPLAY

Bluff City Legends (7-5)
Two wins are likely required from the Legends in order to clinch. BCL is in good shape for an at-large bid if they don't finish in the top five, considering the star power at the top of their lineup.
Remaining schedule: City Rocks, Seattle Rotary, MEBO, CIA Bounce

UPLAY Canada (6-6)
UPLAY will have a chance to play their way into the field, and they'll have to do it against four teams with 8-4 records.
Remaining schedule: Brad Beal Elite, Woodz Elite, MOKAN Elite, Seattle Rotary

CIA Bounce (CAN)
A 4-0 finish is a necessity for Bounce, and they'll need to be better than ever; three of their four Hampton opponents hold 8-4 records.

NY Lightning (8-4)
The Lightning have a chance to eliminate the Renaissance and likely clinch their own Peach Jam berth in the session opener.
Remaining schedule: Renaissance, Expressions, Team Takeover, Team Melo

Team CP3 (9-3)
Team CP3 is in great shape entering session four, but there won't be any let-up from head coach Jon Adams and company. They have a chance to play major spoiler to all four opponents.
Remaining schedule: Indy Heat, Pro Skills, Mac Irvin Fire, All Ohio Red

Indy Heat (8-4)
The 9th-ranked Heat needs a win to get in, and their schedule is tough as nails. They face two programs who have clinched, and two who need to win out.
Remaining schedule: Team CP3, Houston Hoops, Georgia Stars, MeanStreets

MeanStreets (6-6)
MeanStreets looked great in Atlanta. If Brandon Newman and Armaan Franklin are clicking, this is a different unit. Their season could come down to their final game, a rivalry matchup with the Indy Heat.
Remaining schedule: Team Melo, Boo Williams, E1T1 United, Indy Heat

E1T1 United (6-6)
This team is more than talented enough to be eating peaches in July, but their Hampton schedule does not do them any favors. All four games are against Peach Jam contenders.
Remaining schedule: Pro Skills, AOT Running Rebels, MeanStreets, The Family Detroit

Team United (5-7)
United has the easiest remaining schedule on paper, and will likely need three wins to stay in the conversation. They win all four, and they're in.
Remaining schedule: Mac Irvin Fire, Nike Phamily, All Ohio Red, Howard Pulley

Mac Irvin Fire (5-7)
A win over Team United is a must in their session opener. If they can score an upset over Team CP3, that will go a long way in building their resume.
Remaining schedule: Team United, Nike Team Florida, Team CP3, Georgia Stars

Howard Pulley Panthers (4-8)
If the Panthers can sneak by Expressions in the session opener, a 4-0 finish isn't out of the question.
Remaining schedule: Expressions Elite, Team WhyNot, The Family Detroit, Team United

Georgia Stars (4-8)
Arguably the league's most underperforming squad, the Stars NEED a win over the Indy Heat. A 4-0 finish is a definite possibility for this group after a winless Atlanta session.
Remaining schedule: The Family Detroit, The Truth, Indy Heat, Mac Irvin Fire

The Family Detroit (4-8)
The Family haven't had a ounce of luck in 2018, losing numerous heartbreakers. Their Hampton schedule isn't favorable, but with Rocket Watts and Romeo Weems leading the way, they can take out anyone.
Remaining schedule: Ga Stars, Oakland Soldiers, Howard Pulley, E1T1 United

All Ohio Red (4-8)
All Ohio faces one of the tougher remaining schedules and will need to channel the same energy they had during session two.
Remaining schedule: Nike Team Florida, Drive Nation, Team United, Team CP3

Houston Hoops (9-3)
The Hoops season turned around when Tyrese Maxey joined the tray. It's a good thing their berth is already clinched, as their session four schedule is something fierce.
Remaining schedule: MOKAN, Indy Heat, Boo Williams, Oakland Soldiers

Drive Nation (9-3)
Drive went 4-0 in Atlanta, displaying some of the limitless potential they have as a team. They have a chance to improve their seed immensely against a favorable schedule
Remaining schedule: Nike Phamily, All Ohio Red, Team WhyNot, AOT Running Rebels.

Oakland Soldiers (8-4)
The defending Peach Jam champions will secure a bid with one win. They face two programs with 4-8 records, so the Soldiers should be sitting pretty.
Remaining schedule: AOT Running Rebels, The Family Detroit, The Truth, Houston Hoops

Pro Skills (7-5)
A win over the Phamily is a must. There is a high probability that their season will come down to their final game against Team WhyNot.
Remaining schedule: E1T1, Team CP3, Nike Phamily, Team WhyNot

Nike Team Florida (6-6)
NTF will have their work cut out for them, and they'll likely need a session split in order to maintain Peach Jam contender status. Like Bluff City, they have a lot of star power if they end up on the Peach Jam wildcard line.
Remaining schedule: All Ohio Red, Mac Irvin Fire, AOT Running Rebels, Boo Williams

Boo Williams (6-6)
Boo will simultaneously attempt to defend home court and qualify for a Peach Jam during session four. Their season could come down to their finale against fellow bubble team NTF.
Remaining schedule: The Truth, MeanStreets, Houston Hoops, Nike Team Florida.

The Truth (4-8)
The Truth is one loss from being eliminated from automatic contention, but after a strong 3-1 showing in Atlanta, we're not ready to write off LA's EYBL rep just yet.
Remaining schedule: Boo Williams, Georgia Stars, Oakland Soldiers, Nike Phamily