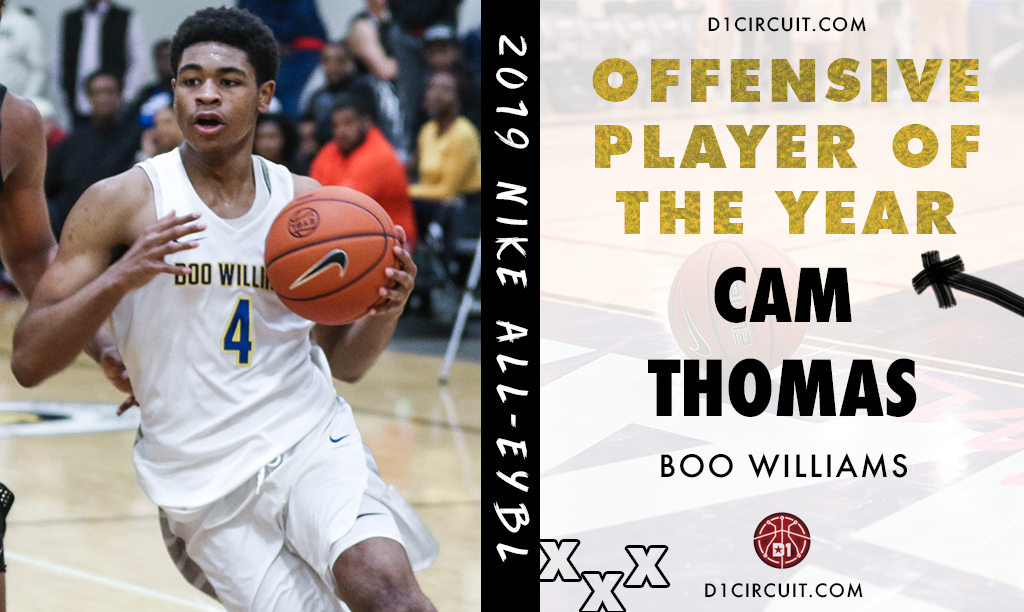 "Nothing he does on the offensive end of the floor ever surprises me."

The man behind the previous quote is legendary Oak Hill Academy head coach Steve Smith. Winner of over 1,000 high school games in his coaching career, Smith has seen a thing or two in his day. He's won multiple national championships and coached the likes of Kevin Durant, Carmelo Anthony, and Rajon Rondo among countless other professional and college stars.

The point is - Smith has been around the block.  He's coached a lot of talent and had the pleasure of coaching Thomas this past high school season. He knows when a prospect has that 'it' factor, and according to Smith, Thomas checks off every box.

The Boo Williams' junior averaged a league-high 29.5 points per game over 13 games, scorching the nets for en route to six game scoring 30+. Not only was Thomas a consistent scoring machine, but he also did it with remarkable efficiency. Thomas went 91-for-102 from the free throw line, leading the EYBL in free throw attempts with his aggressive, always-attacking playing-style. He added averages of 48 percent from the floor and 39 percent from distance, resulting in one of the most efficient bucket-getters in recent EYBL history.

He can score as well as anyone in high school basketball, and it comes down to his preparation.

“He is one of the most locked in players I have seen in high school with his attention to detail,” Smith said. “He is always in the gym early working on his game shots."

Thomas' output shouldn't come as too big of a surprise, especially considering how well he played for Oak Hill during the 2018-19 season. Thomas averaged 26.3 points alongside the UNC-bound Anthony, and his ability to score with efficiency has translated in a big way during his second season on the circuit.

Smith will have Thomas for one more season at Oak Hill, and Smith figures it will be more of the same from his talented combo guard.

“The kid really wants to be great," Smith said.

"And he does everything to make it possible.”

Thomas and company will be at next week's Peach Jam, looking to make up for lost time after failing to qualify a year ago. Check out BallerTV's highlight reel below, and make sure to check back to D1Circuit.com as Peach Jam begins on July 10

RT @nikebasketball: The Chosen-1’s Invitational created space for others to tell their stories and inspire the next generation. Striving fo…

RT @nikebasketball: 💎s are forever. Introducing the 2021-22 Nike NBA City Edition Jerseys—celebrating some of the most iconic moments in t…

RT @Hoophall: Basketball Hall of Fame and @nikebasketball to Host The Chosen-1’s Invitational. @KeckMedUSC & @BeyondMeat to serve as Sponso…